Built in 1667 on the site of the Naval Yard, now Navyard. It was moved to its present site on Harwich Green in about 1932. It stands on a slight eminence where once stood Queen’s Mount Battery for the defence of Harwich.

The crane was worked by men walking in the interior of the wheels (as opposed to jail treadmills where the operators walked on the outer surface). Two wheels produce balanced action. Each wheel is 16ft (5.8 m) diameter, 3ft 10 ins (1.4 m) wide and made of oak. The wheels are spaced 4ft (1.5 m) apart on a common axle 13½ ins (34 cms) diameter. The jib has a projection of 17ft 10ins (6.5 m). It is described as a ‘House Crane’ in official records to distinguish it from the unenclosed type. Originally it had a boarded roof but pantiles were later substituted. 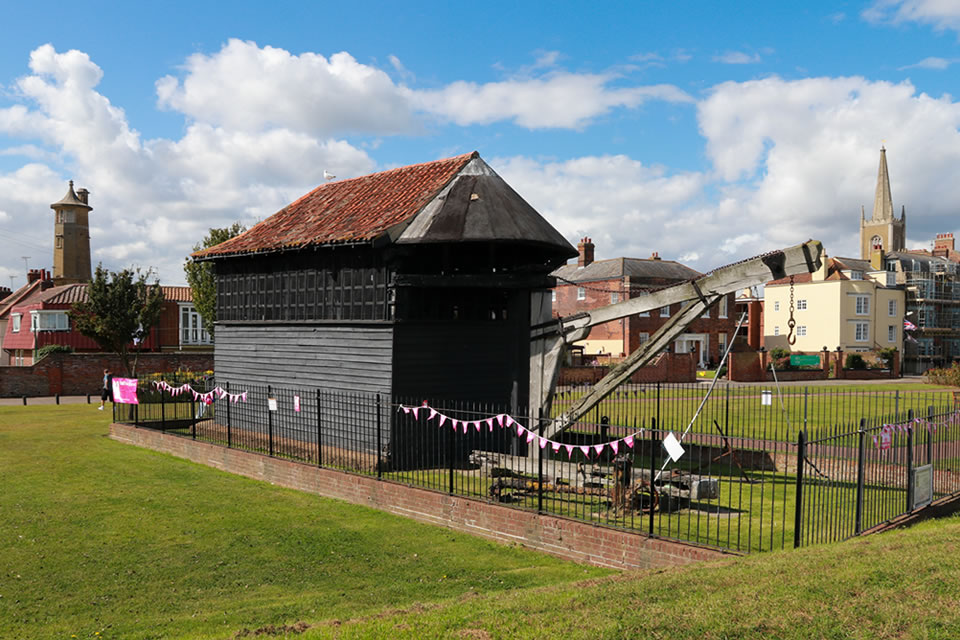 A conspicuous omission is any form of brake which made this type of crane somewhat dangerous. A spar was kept handy for levering against the outer edge of the wheel. But the efficiency of such a crude form of braking depended upon both the presence and presence of mind of a workman at the critical moment, a doubtful combination. Should the load take command, the men in the wheels would be revolved backwards with disastrous results.

The earliest known reference to a crane of this type was by the Romans in 25 B.C. By the Middle Ages, such cranes were common in this country. However, by the end of the 17th Century/beginning of the 18th Century, these cranes had only one drum and the power was supplied by a donkey. As far as is known Harwich has the only British example of a two-wheel man operated treadwheel crane.

Listed on the National Heritage List for England, the Harwich Treadwheel Crane

This building can be visited by arrangement with the Harwich Society.