The Harwich Radio Direction Finding (RDF) Tower was built just before April 1941 and housed one of the earliest applications of RDF.  Ten similar sites were built around the UK covering important rivers, docks and harbours.  RDF became better known as RADAR around 1943, an American term short for Radio Detecting And Ranging.

It was used to cover the naval minefield that had been laid across the estuary between Essex and Suffolk.  The range and bearing would be transmitted to one of the Extended Defence Officers (EXDO) posts at Beacon Hill or Landguard Fort, from which the appropriate mines were selected electrically and detonated.

The ground floor of the tower consists of five rooms:  The generator room, crew accommodation, mess room, Toilet and lobby (this includes a hatch to the middle and top floor, used to raise equipment).  The original generator remains in situ.

The middle floor was the Operations Room.  It would have housed the equipment needed to operate the array (aerial) on the upper floor.  This would have included a transmitter, receiver and telephones etc.  In the centre of this floor is the manual device used to rotate the array on the top floor.  Two men would slowly swing the aerial back and forth across the minefield until the strongest signal was detected from an incoming vessel, this was the bearing.  It was never used as a plotting room as this operation was carried out in the EXDO towers.

The top floor houses an extremely rare survivor, a Type 287 RDF array.  This is largely original and consists of two ‘pig trough’ reflectors, one above the other, both 21 feet (6.4m) wide.  It was powered by the generator on the bottom floor; this gave it a range of 2 miles, enough to cover the minefield.  The Type 287 was a modification of the earlier Type 284 that had been used on battleships, including the HMS Hood, and was used for gun laying.  The 50cm wavelength and 5 degree signal width made the types 284 and 287 ideal for pinpointing vessels at sea level.

When the building was cleared up inside by the Harwich Society in the early 2000s various bulky pieces of equipment were found which suggested that it had housed a Second World War radar. These were: most impressively a huge metal frame supporting two long concave metal troughs, pierced with small holes, placed one above the other – on the top floor; a two-ended handle – on the middle floor, a small electric generator – on the ground floor. 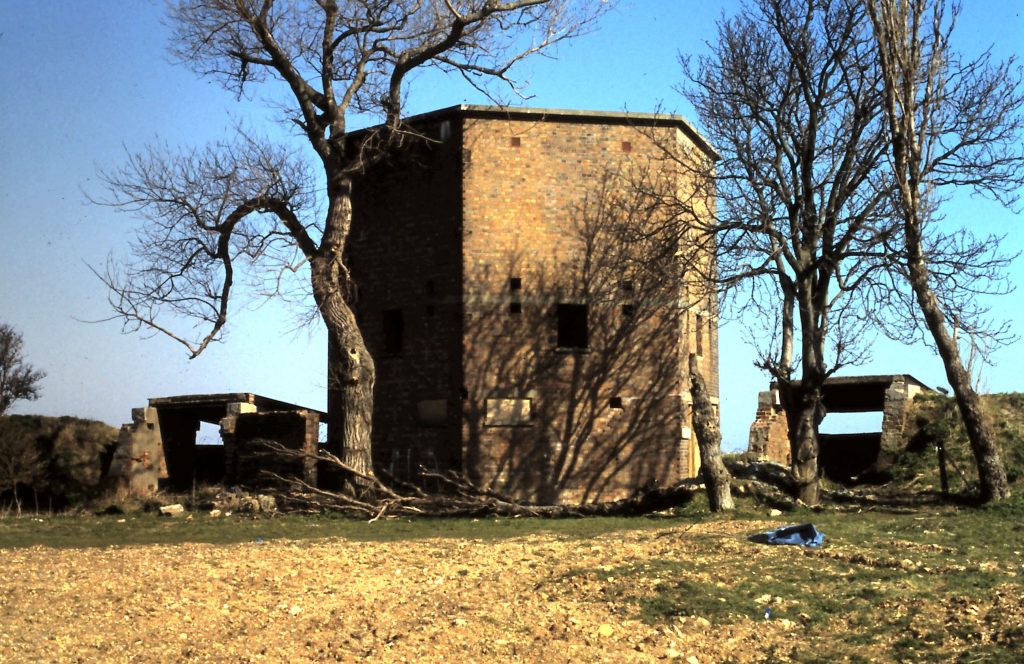 The Radar Tower was in the worst state as the foundations were collapsing on one side. It was considered to be of special interest since it was a good example of an early radar installation (built in 1941), the original scanners still being inside as they were too big to be removed. Radar was, of course, developed at Bawdsey Manor on the River Deben, a few miles north of Harwich, in the early years of the Second World War and the Tower was part of the scheduled ancient monument complex of Beacon Hill.

The estuary at Harwich formed by the rivers Stour and Orwell is the only safe natural harbour between the Thames and the Humber. Therefore it has been vital in Britain’s East Coast defences for several hundred years.The fort was designed to be relatively inconspicuous from the seaward side and landward defences were earthworks and fencing. This profile changed during World War II (WWII) when Battery Observation Post towers were constructed.

The fort initially had two breech loading guns (one 10″ and one 6″) mounted on disappearing carriages which allowed reloading under cover, two 4.7″ quick firing guns to combat fast torpedo boats and two 3 pounder guns which provided flanking fire. Rapid changes in military technology between the end of the last century and WWII resulted in numerous alterations to the Armament of Beacon Hill Fort, and some of the emplacements exhibit at least three major phases. At the turn of the century, a 6″ quick firing gun was added to the Fort’s new northern extension, only to be replaced during WWII.

The last major addition was the construction of the Cornwallis Battery, the twin 6 pounder built in 1941. The larger guns have concrete anti-aircraft covers (Casements) added during WWII, one of which had a Bofors anti-aircraft gun on top of it. Additional anti- aircraft fire was provided by at least three Lewis guns. Four spigot mortars and five pillboxes provided ground defence. The larger guns have dedicated subterranean magazines, each with separate storage areas for shells and cartridges, the latter of which were extremely volatile. Light was initially provided by lamps placed in recesses in the walls, which were glazed to prevent sparks igniting the cartridges. 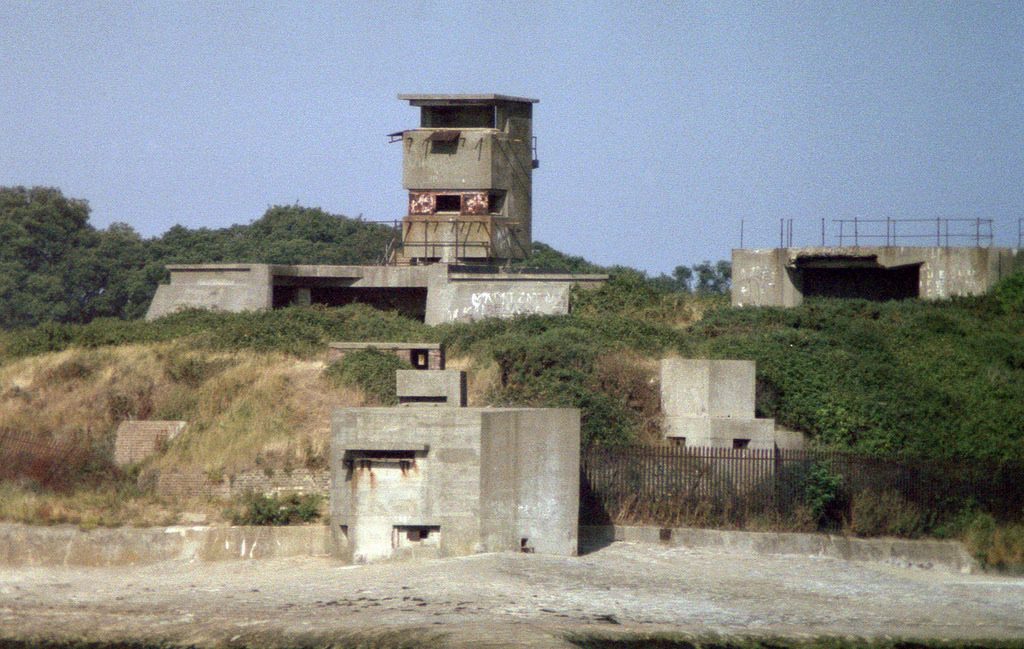 Electricity later replaced the lamps. Some magazines had mechanical hoists of various designs to transport the heavy ordnance directly to the gun emplacements. There were two smaller magazines probably for storage of ordnance for small arms. Such a large defensive coastal battery required a substantial support structure, and this is evident in many other structures at Beacon Hill Fort. Observation and fire control towers, shelters, a guardroom, storerooms and two engine houses providing power for the whole fort.

During WWII, two fixed and several mobile searchlights were placed along the seafront. The Beacon Hill area has been the subject of great debate over the years as to its usage, however nothing has come of this and the site falls into greater and greater disrepair. Attempts have been made to limit access to ensure the survival of the buildings but the lack of funding and therefore fencing makes this an almost impossible task. The site is too attractive as a playground for children and acts as a ‘magnet’ for those bent on graffiti and vandalism.

The fort was decommissioned in 1956 and all artillery removed and by the late 1960’s to early 1970’s its military presence consisted of one soldier for 24 hours, one day a year. In the 1970’s it was sold and in January 2018 was brought by the present owners Barry Sharp and Paul Valentine.

Opening times are season dependent and will be regularly updated on the website www.beaconhillfort.org.uk and display boards.