A Warm welcome awaits visitors to Harwich and Dovercourt in 2021, we celebrate the sailing of the Mayflower to the new world in 1620 (Mayflower 400). Many of the local historic sites will be open for your visit. Harwich Society members will be available to enhance your viewing and understanding of our maritime heritage. 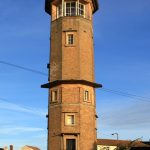 Built in 1818 to replace a light over the Town Gate. This and the Low Lighthouse were used in transit to aid navigation into the harbour. Withdrawn from service in 1862 and now houses a museum of local interest. 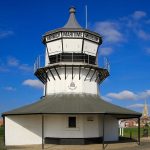 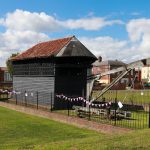 Built in 1667 on the site of the Naval Yard, now Navyard. It was moved to its present site on Harwich Green in about 1932. It stands on a slight eminence where once stood Queen’s Mount Battery for the defence of Harwich.

The crane was worked by men walking in the interior of the wheels (as opposed to jail treadmills where the operators walked on the outer surface). 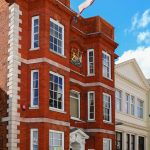 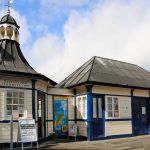 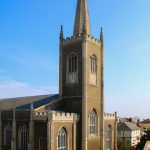 A church has stood on this site since 1177 when the Chappele of Herewyche was founded by Roger Bigod, first Earl of Norfolk, and given together with the Church of Dovercourt to the Monks of Abendon at Colne (Earls Colne).

The crusaders rested here following the Banner of the Cross across Europe to the Holy Land. Kings, Queens and Princes have worshipped here on their way to and from the Continent.   Opening hours vary. 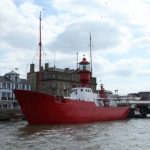 The ex-Trinity House vessel LV18 is the last surviving example of a manned light vessel in British waters, which has been preserved in its original configuration and restored to a high standard of authenticity.
Accessed from the quay, Harwich LV18 is owned by the Pharos Trust. Refer to website http://www.lv18.org/ For opening times and prices.

Harwich Society members will be ready to guide you round the town, explaining some of the history on your approximately 1 hour 15 minute gentle walk.  These start from near the Highlight, 2 minutes walk from Harwich Town Railway Station (junction of West Street and Main Road), at 10.00 and 11.00.  The guides give their time freely but a donation to the Harwich Society will be very welcome.

follow the Maritime Trail with the informative leaflet in several languages available from the open sites, Visitors Centre and the Harwich Society website

GETTING TO HARWICH and DOVERCOURT

Cost – the return fare is about £3.00. Pay in the train (credit cards accepted).

Taxi – these will take you from the Port to Ha’penny Pier or the Highlight tower.

Cruise ship Shuttle Bus – please obtain details from your cruise ship representative.
Bus –  Harwich is a 27 minute ride (Bus No. 2) from the Port:

– spend the morning exploring the historic streets and sites of the Harwich old town.

– enjoy a sandwich or lunch at one of town’s cafes or public houses. Or enjoy traditional fish and ships while watching the boats from Ha’penny Pier or the river-side seats next to The Green, near the Highlight.

– in the afternoon, visit the Napoleonic Harwich Redoubt (open all day)

– stroll along the promenade to the beaches of Dovercourt Bay and local shops in Dovercourt’s High Street (cafes, internet, library, newsagents, bakers, chemists and opticians).

– trains back to your cruise ship depart Dovercourt Railway Station:

INFORMATION ON THE DAY

Harwich Society members will be available for maps, guide leaflets and directions (these are all free) at the: