An extremely impressive 180ft (60m) diameter circular fort built in 1808 to defend the port of Harwich against a Napoleonic invasion. Ten guns sit on the battlements. Eighteen casements below would house 300 troops in siege conditions.

Part of the fort is now used as a military museum. Battle re- enactments and other events are held during the summer months. The fort was restored by the Harwich Society as a voluntary project.

Up a track off the Main Road, the moated circular Redoubt Fort was built in 1808 to defend the harbour against the threatened invasion of Napoleonic forces. It mounted ten 24-pounders and housed a regiment of soldiers with sufficient food and stores to withstay a lengthy siege. Fortunately it was never called upon to demonstrate its powers. It should be remembered that at the time the Redoubt was built (1808), Harwich stopped at the High Lighthouse, while Dovercourt was about a mile up the road, the London Road. There was always a natural hill where the Redoubt now stands. Originally it was surmounted by a house, Hill House, which was purchased and demolished to make way for the Redoubt. There was also a conspicuous elm tree on the hill, known as Paine’s Tree, which was marked on old charts as a landmark for mariners. It was of great age and enormous girth and was so hollowed that it could be used as a shelter. It was removed to the Storekeeper’s garden at Ordnance Buildings where it served as a summer house for at least half a century. The tree was probably named after the man who owned Hill House. The London Road also came over the hill, and this had to be diverted to its present position (Main Road) except that at this time it was called New London Road. 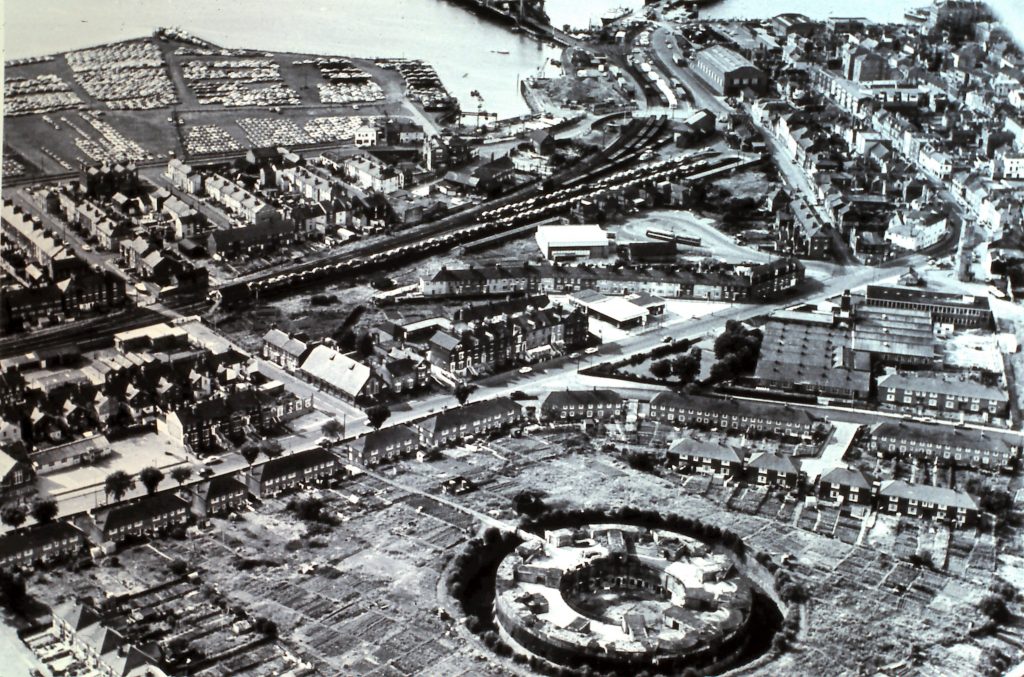 After this site clearance, The Redoubt was then built on top of the hill. A retaining wall was subsequently built in a circle outside the fort, thus forming a dry moat between the two. Earth was brought by pannier donkeys from the nearby low lying area (now known as Bathside) and tipped around the outside of the retaining wall to form the earthworks, which are now covered by allotments. This excavation at Bathside had repercussions in the 1953 floods as the area was then below sea level. The water came in through a breach in the sea wall and stayed in. Eight lives were lost. The Redoubt earthworks form an integral part of the fort’s defences. It meant that only a very small portion of the fort was presented as a target, and cannon balls, which were aimed too low, lost themselves harmlessly in the earthworks. The building was completed in three years, which was an extremely quick time when one remembers that everything had to be done by hand. There is a local legend that French prisoners of war helped with the construction. The cost of the Redoubt was £55,000 – an enormous sum for those days.

Within weeks of work starting at the Redoubt Fort, local well-wishers were calling to tell us what we should be doing. Many of them knew the fort well from childhood adventures there are several spoke of guns being buried in the fort. One persistent caller from Mayflower Avenue was happy to show us where a gun was buried. To pacify him we probed the area.

The discovery of a large object about 3ft below the surface of the moat did not excite us for we were accustomed to finding all kinds in the moat, everything from old wash tubs to mangles. But we were surprised when subsequent digging revealed a large metal pipe. We became alarmed when the further we dug down the larger the pipe became. Some thought that we had unearthed the main Harwich sewer! In due course all was revealed, and it was a mighty cannon. For some weeks it lay in its rain filled hole looking like a hippopotamus while we pondered what to do next. 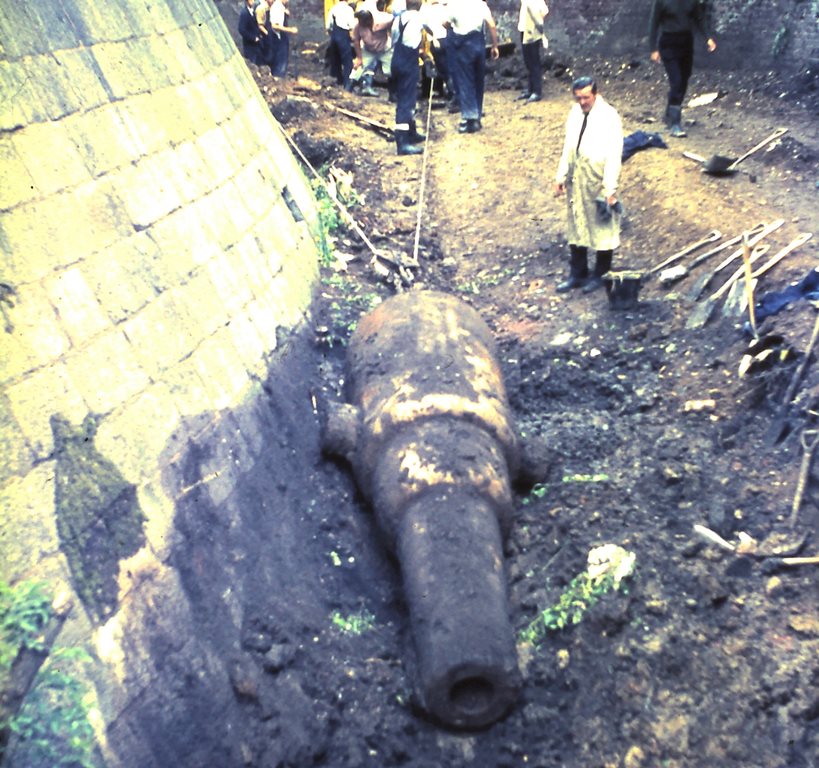 Meanwhile we got on with levelling the moat, which at one point reached the top of the retaining wall. This huge pile of soil came from foundations of the Norwegian houses below. Being expert scroungers we persuaded the driver of the JCB working on Harwich beach to come to our aid in the moat. The produced the man, and soon the JCB Boss, looking for his machine, found the hippopotamus, and said “I can do that!” At his command all available helpers were assembled early the following Sunday morning.

Attaching a long rope to the structure of the fort (through a window aperture), it was then fed through the eye of the gun, to a hand winch, and finally tied to the JCB which had just dug itself into the soil as an anchorage. 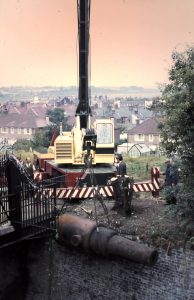 By using the hand winch, the gun was slowly eased out of its hole and forward for about 10ft. Of course you can only pull in straight lines, so every 100 ft. or so, the anchorage points had to be moved forward to compensate for the curvature of the moat. Then in one continuous eleven hour operation the gun was moved half was round the moat, to end up under the bridge. Next day a mobile crane arrived which lifted the gun and the JCB onto the bridge. A giant forklift truck from Navyard moved the gun inside the fort, but the low arch of High Ward prevented further progress with the giant forklift. Once again the project came to a standstill while we pondered how to get the gun around to its original position at Cook Street embrasure. Then someone had a brainwave, why not ask the army to move it, since they were expert at this sort of thing.

The Army agreed but as we were to discover their solution was rather primitive. It entailed taking a rope from the gun, through the arch to Cook Street embrasure, and then right across the middle, and through the gate, to be fixed to a large truck at the top of the hill. The theory was that the truck would pull the gun as it moved downhill. We were horrified about the possibility of the rope breaking and with its backlash, decapitating anyone nearby. 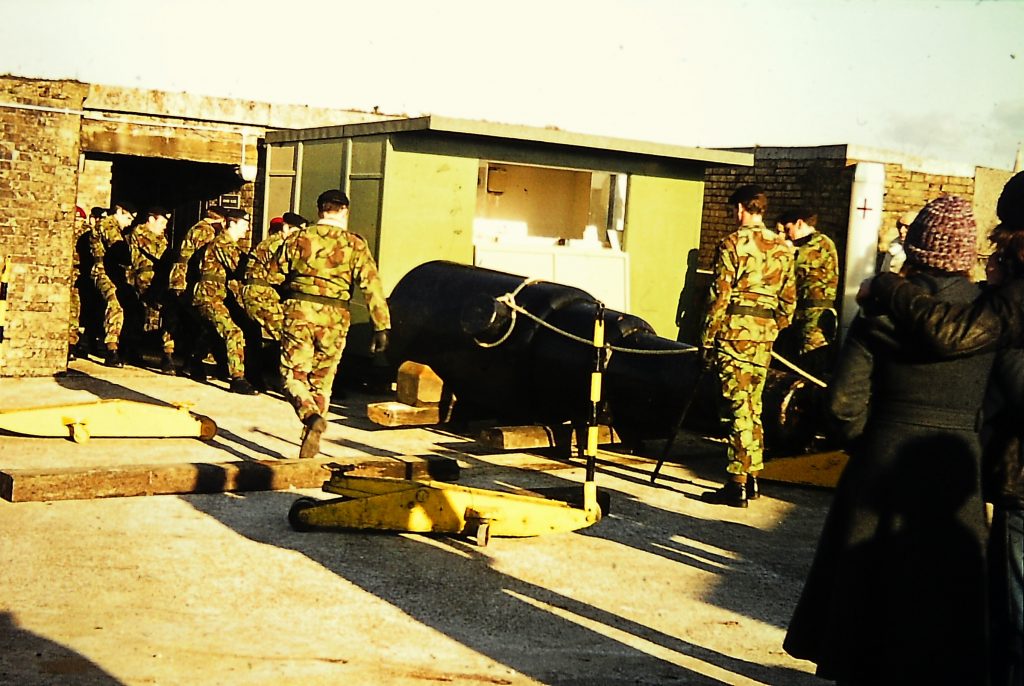 Cowards that we are we fled the fort and left the army to it. We retuned next day to find the gun beautifully positioned at Cook Street embrasure. A mock carriage made with old railway sleepers was built to carry it. But the 12 ton weight of the gun was too much, and the gun had to be suspended on skyhooks until a more permanent concrete replica was constructed. Identified as a 9inch RML, the gun later named Gilbert in memory of Roger Gilbert who led the recovery operation throughout. No one looking at the Gilbert Gun today could image the sweat and toil of the volunteers to get it to its present position.

The Harwich Redoubt, which celebrated its 200th anniversary in 2008, formed part of the Martello Tower chain of defences extending from Aldeburgh to Seaford, as defences against a possible Napoleonic invasion. After 1910 it became barrack accommodation and in the late 1920 the whole area was bought by the Town Council to build houses on the surrounding land and the Redoubt left to decay. During WW2 it was taken back into military use, but only employed for minor purposes. After the war, the structure was transferred to the Civil Defence, who built the present fixed bridge over the moat and then used the fort for atomic exercises until their disbandment.

The fort is open to the public every Sunday throughout the year from 10am – 4pm.

Between 1st May-30th September it is open from Thursday to Sunday from 10am – 4pm.

For the safety of all visitors and our volunteers, a one-way system will be in operation. Whilst visiting the fort, please observe social distancing

The entrance is opposite 42a Main Rd. To assist you navigate to the site the postcode is CO12 3LT.

The Redoubt Open Day is held on the August Bank Holiday each year.

The Redoubt kiosk serves light refreshments – hot and cold drinks, and ice creams, we also have a selection of souvenirs to purchase.

A stair lift is available to/from the upper and lower levels of the fort. There is a weight restriction of 18st.