HISTORIC MAYFLOWER VOYAGE MARKED BY NEW FILM ON ITS HOMETOWN

In November 1620 the Mayflower, with its 100 passengers, made landfall after a gruelling 10-­‐week voyage across the Atlantic . Among those passengers was a group of Puritans seeking a safer life in the New World. They became known as the Pilgrim Fathers.

The Mayflower and its Master, Christopher Jones, were from Harwich in Essex and four hundred years later a new film on this ancient seaport is about to be released.

David describes the film, which lasts 75 minutes, as an affectionate look at the town of his birth. “ A two year labour of love .“

“ A number of events had been planned for Harwich to celebrate the 400th anniversary of the Mayflower voyage but sadly the pandemic saw them all postponed “ said David.

“Fortunately, my own little contribution to the anniversary has been unaffected by events. I was able to film pre-­‐lockdown so there’s not a face mask to be seen!

Much of the recording was done during the summer of last year so viewers can enjoy the Secret Gardens and the Illuminate and arts festivals. I also joined shanty singers aboard a barge as we sailed the estuary.”

Local people have shared memories of wartime and how the town embraced child refugees fleeing Nazi Germany. The fateful night in January 1953, when

floods raged through the town is vividly recalled. As is the day supporters of Harwich and Parkeston cheered on “ The Shrimpers “ in the F. A. Amateur Cup Final at Wembley, that same year. David also recalls a very early morning watching ketchels (small spicy buns) being baked for the Harwich Mayor-­‐ making celebrations.

“I am grateful to members of the Harwich Society and in particular its archivist, David Whittle,” said David. “ They have embraced this project and helped me access the different historical sites such as the Redoubt fort and the town’s lighthouses. “

PORTRAIT OF HARWICH is presented by David’s daughter, Victoria Lampard, whose face will be known to viewers of ITV Anglia, where she is a news correspondent and presenter.

The DVD is available to buy from the Harwich Society, please contact David Whittle email davidwhittle18@gmail.com 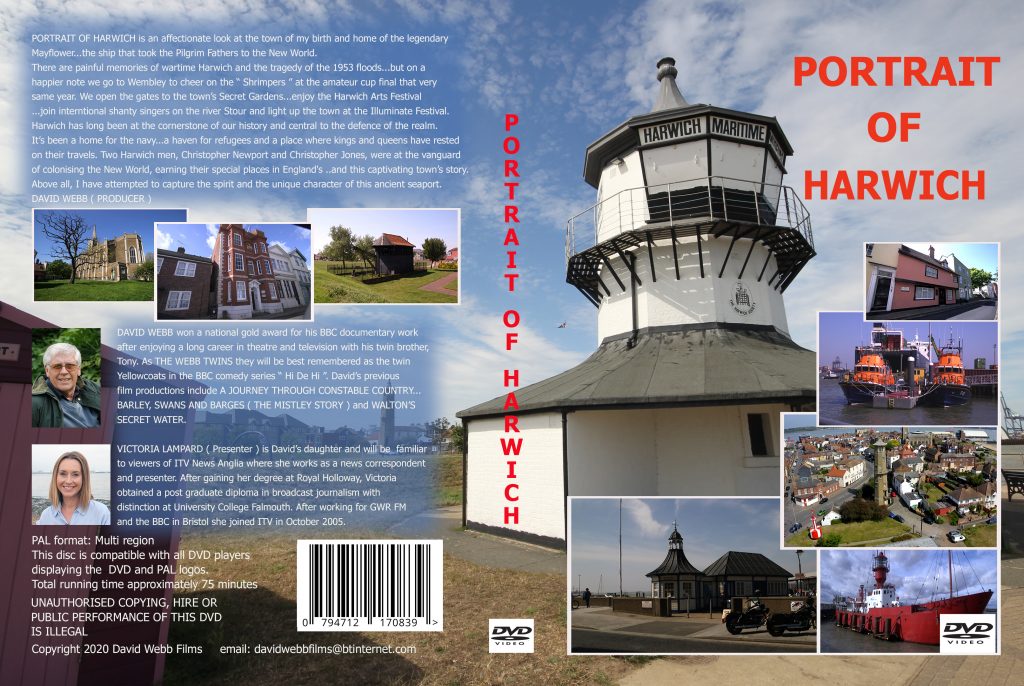